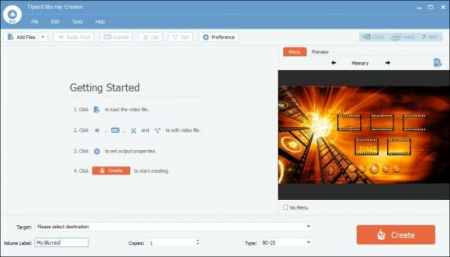 Create Blu-ray disc with your own video and convert any video to Blu-ray folder/ISO file for better playback and preservation.

Tipard Blu-ray Creator is an easy-to-use and powerful Blu-ray creator. It enables you to burn any video into Blu-ray disc/folder/ISO file with high quality and fast speed. Whether you want to make Blu-ray disc for your Blu-ray player, or create Blu-ray folder or ISO file for the long-term preservation and better sharing, this powerful Blu-ray Creator can be your best choice.

Create Blu-ray disc with any video you have

Tipard Blu-ray Creator has the ability to burn Blu-ray disc with any video file like AVCHD video, 4K UHD/HD/SD video, ed YouTube video, recorded video, Quick video and more. It provides two creating types for you to choose from. You can burn video to BD-25 and BD-50 as you like. This marvelous Blu-ray disc creating software can work greatly on Windows 10/8/7/XP/Vista computer. And the output Blu-ray disc will be compatible with any popular Blu-ray player device like Sony BDP-S5, Samsung BD-F, LG Electronics BP, PS3 and Blu-ray player software.

This fantastic Blu-ray creator is equipped with many editing options for you to edit video and customize the output Blu-ray effects. With its help, you can handily clip the video length to only save the useful part, crop video to better fit screen, set output effects by adjusting brightness, contrast, saturation and hue, add your personal watermark. What’s more, you can freely and edit Blu-ray menu, add new audio track and subtitle to the Blu-ray disc/folder/ISO file. After all these settings, you can get a Blu-ray you really like.

With its intuitive interface and user-friendly design, it allows you to easily burn video to Blu-ray disc and create Blu-ray folder/ISO file with any video you have. Even as a fresh hand, you can create a Blu-ray disc out from the recorded or ed video within just a few clicks. Moreover, with the adoption of the latest NVIDIA CUDA, AMD APP Acceleration and Intel Quick Sync Video Tech, it guarantees you a super-fast Blu-ray creating speed. Intuitive interface, high output quality and fast creating speed can give you the best user experience.

Before burning Blu-ray, you are allowed to play and preview the output effects through its built-in player so as to modify the effect in .

When you view the loaded video, you can take a snapshot and save it as a picture in JPG, PNG and BMP for saving the wonderful moment.

You are allowed to add and select your favorite pictures and songs as the blu-ray menu template.

You can burn one and more video files to Blu-ray disc/folder/ISO file at a to improve the Blu-ray creating efficiency.

Update the kernel to enhance the efficiency.