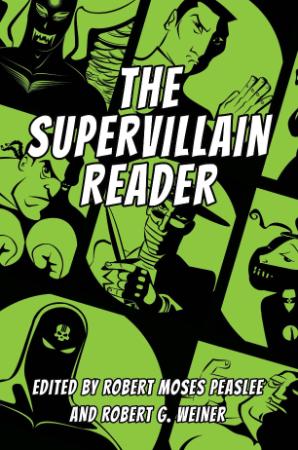 The Supervillain Reader, featuring both reprinted and original essays, reveals why we are so fascinated with the villain. The obsession with the villain is not a new phenomenon, and, in fact, one finds villains who are “super” going as far back as ancient religious and mythological texts. This innovative collection brings together essays, book excerpts, and original content from a wide variety of scholars and writers, weaving a rich tapestry of thought regarding villains in all their manifestations, including film, literature, television, games, and, of course, comics and sequential art. While The Supervillain Reader focuses on the latter, it moves beyond comics to show how the vital concept of the supervillain is part of our larger consciousness.

Editors Robert Moses Peaslee and Robert G. Weiner collect pieces that explore how the villain is a complex part of narratives regardless of the original source. The Joker, Lex Luthor, Harley Quinn, Darth Vader, and Magneto must be compelling, stimulating, and proactive, whereas the superhero (or protagonist) is most often reactive. Indeed, whether in comics, films, novels, religious tomes, or video games, the eternal struggle between villain and hero keeps us coming back to these stories over and over again.

Thanks for downloading The Supervillain Reader :