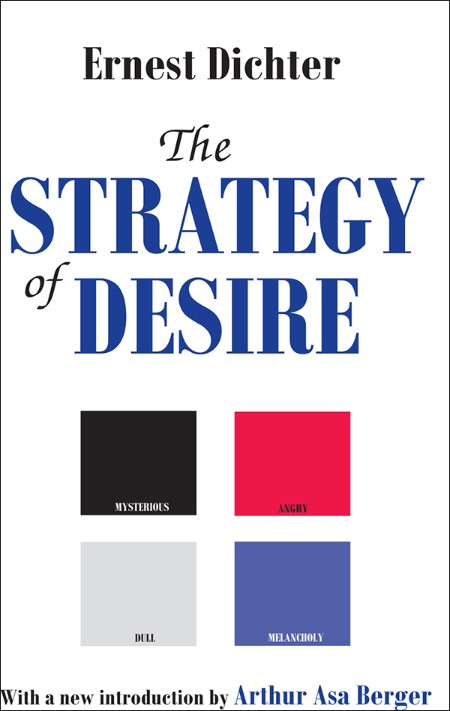 Ernest Dichter is famous as one of the founding fathers of motivational research. In applying the social sciences to a variety of problems, Dichter emphasized new approaches to problem solving, advertising, politics, and selling, and issues of social significance such as urban renewal, productivity, and drug addiction. As an author and corporate adviser, he used psychoanalytic theory and depth interviewing to uncover unconsciously held attitudes and beliefs. He goal was to help explain why people act the way they do and how positive behavioral change might be achieved. In The Strategy of Desire, Dichter both counters the argument that motivational research amounts to manipulation, and shows how the understanding and modification of human behavior is necessary for progress.
Dichter’s survey and analysis of behavior ranges widely. He examines everyday matters of product choice, as well as such broad civic issues as voter participation, religious toleration, and racial understanding. He shows that in order to achieve socially constructive goals, it is necessary to move beyond theological exhortation, which takes an unrealistic view of human morality, as well as beyond the limits of empirically oriented social science research, which only deals in appearances. Dichter sees human action as rooted in irrational and often unconscious motivation, which can usually be uncovered if the correct approach is used. In his consumer research, he analyzes the nonutilitarian importance of objects in everyday life, as well as how products and materials become bound with emotional resonance or acquire different meanings from different contexts or points of view. Dichter shows that success depends on the satisfaction of desires and a movement beyond the ethic of work and saving. Arguing that in an increasingly technological world, progress and social harmony are materially based, he advocates a morality of the good life in which prosperity and leisure lead to greater h

AloMoves – Alo in the Wild- Montenegro