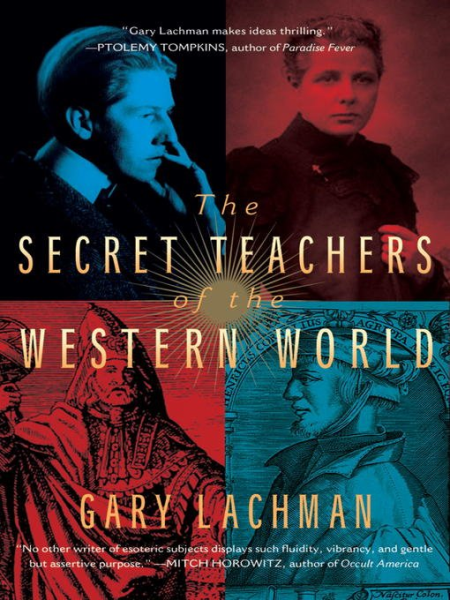 This epic study unveils the esoteric masters who have covertly impacted the intellectual development of the West, from Pythagoras and Zoroaster to the little-known modern icons Jean Gebser and Schwaller de Lubicz.

Running alongside the mainstream of Western intellectual history there is another current which, in a very real sense, should take pride of place, but which for the last few centuries has occupied a shadowy, inferior position, somewhere underground.

This "other" stream forms the subject of Gary Lachman’s epic history and analysis, The Secret Teachers of the Western World.

In this clarifying, accessible, and fascinating study, the acclaimed historian explores the Western esoteric tradition – a thought movement with ancient roots and modern expressions, which, in a broad sense, regards the cosmos as a living, spiritual, meaningful being and humankind as having a unique obligation and responsibility in it.

The historical roots of our “counter tradition,” as Lachman explores, have their bning in Alexandria around the of Christ. It was then that we find the first written accounts of the ancient tradition, which had earlier been passed on orally. Here, in this remarkable city, filled with teachers, philosophers, and mystics from Egypt, Greece, Asia, and other parts of the world, in a multi-cultural, multi-faith, and pluralistic society, a synthesis took place, a creative blending of different ideas and visions, which gave the hidden tradition the eclectic character it retains today.

The history of our esoteric tradition roughly forms three parts:

Part One: After looking back at the earliest roots of the esoteric tradition in ancient Egypt and Greece, the historical narrative opens in Alexandria in the first centuries of the Christian era. Over the following centuries, it traces our “other” tradition through such agents as the Hermeticists; Kabbalists; Gnostics; Neoplatonists; and early Church fathers, among many others. We examine the reemergence of the lost Hermetic books in the Renaissance and their influence on the emeg modern mind.

Part Two bs with the fall of Hermeticism in the late Renaissance and the bning of “the esoteric counterculture.” In 1614, the same year that the Hermetic teachings fell from grace, a strange document appeared in Kassel, Germany announcing the existence of a mysterious fraternity: the Rosicrucians. Part two charts the impact of the Rosicrucians and the esoteric currents that followed, such as the Romance movement and the European occult revival of the late nineteenth century, including Madame Blavatsky and the opening of the western mind to the wisdom of the East, and the fin-de-siècle occultism of the Hermetic Order of the Golden Dawn.

Part Three chronicles the rise of “modern esotericism,” as seen in the influence of Rudolf Steiner, Gurdjieff, Annie Besant, Krishnamurti, Aleister Crowley, R. A Schwaller de Lubicz, and many others. Central is the life and work of C.G. Jung, perhaps the most important figure in the development of modern spirituality. The book looks at the occult revival of the “mystic sixties” and our own New Age, and how this itself has given birth to a more critical, rigorous investigation of the ancient wisdom.

With many detours and dead ends, we now seem to be slowly moving into a watershed. It has become clear that the dominant, left-brain, reductionist view, once so liberating and exciting, has run out of steam, and the promise of that much-sought-after “paradigm change” seems possible. We may be on the brink of a culminating moment of the esoteric intellectual tradition of the West.

Wonder Woman and Captain Marvel: Militarism and Feminism in Comics and Film

What’s the Story? The Director Meets Their Screenplay: An Essential Guide for Directors and Writer-Directors