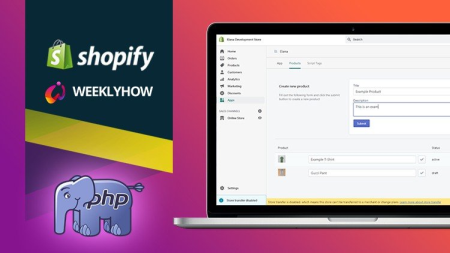 You will learn how to create amazing Shopify apps

You will learn how to use Shopify REST API

You will learn how to use GraphQL API in vanilla PHP

You will learn how to design a Shopify app without Polaris

You will learn about ScriptTags, App Bridge, etc.

You will learn about JWT / Session Tokens in Shopify

Must know even just a bit of HTML, CSS, and JavaScript.

Basic understanding of Shopify and its store features

When you wish to learn to program, the first thing most coders think of is to learn Python, C++, WordPress, or WooCommerce. But all of these languages and platforms are already saturated. That’s why if you learn them, you’ll most likely end up not getting a profit.

So, instead of making WordPress or other stuff, why not start making Shopify apps Like what Shopify said, "There’s never been a better to build a Shopify app because there are more than 1.8 million merchants across the globe that build, scale, and manage their businesses on Shopify".

So why not start making Shopify apps

If you don’t know, you can make thousands of dollars with Shopify apps MONTHLY! You heard me right, MONTHLY! and you know what’s more amazing Shopify is no longer getting any shares from your app revenues! What that means is your profit is all yours!

In this course, I will be teaching you how to create a Shopify app from scratch using vanilla PHP. That means we are NOT going to rely on libraries or repositories created by other programmers. We ARE going to create everything from scratch.

If you want to learn more about me, I have been developing Shopify apps since 2018 and so all of the things I know, I will be sharing with you so YOU can start your new career and make a profit out of your Shopify apps.

Here is what you are going to learn in this course:

Creating a local server and tunneling

Connecting your Shopify app to the database

Shopify store owners who wants to create their own apps

Budget Gadgets in Life are Affordable

Beginners Guide To Building Ecommerce Websites With WordPress And Elementor