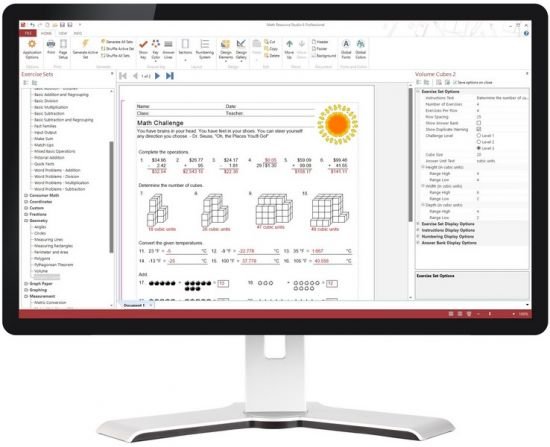 Provide students with the precise skills development and math practice they need as part of a differentiated numeracy program. Create individual or class sets of professional math worksheets, workbooks, or tests quickly and effortlessly saving valuable preparation time and resources.

Graphing
Activities for working with line and bar graphs.

Be more productive
Producing math practice worksheets with Math Resource Studio is as simple as selecting the types of questions you want and how many, setting a few options to control the difficulty of the questions, and clicking the generate button. A powerful random generation engine takes over and creates an original set of questions, calculates the answers, and in just seconds you have a completely unique and original math worksheet.

Support your objectives
Easily create the exact math worksheets you require to support your instructional objectives and desired learning outcomes. Math Resource Studio allows you to precisely specify the type and level of worksheet needed to assess prior learning, reinforce lesson concepts, and evaluate what has been learned.

Save time
Never spend valuable and scarce hours preparing math worksheets again. No more picking through file folders of old photocopies and blackline masters, flipping through workbooks, getting lost in the mazes of online worksheet providers, or manually creating one with pencil and paper. The exact differentiated math worksheet activity you require for tomorrow’s lesson will be only seconds away.