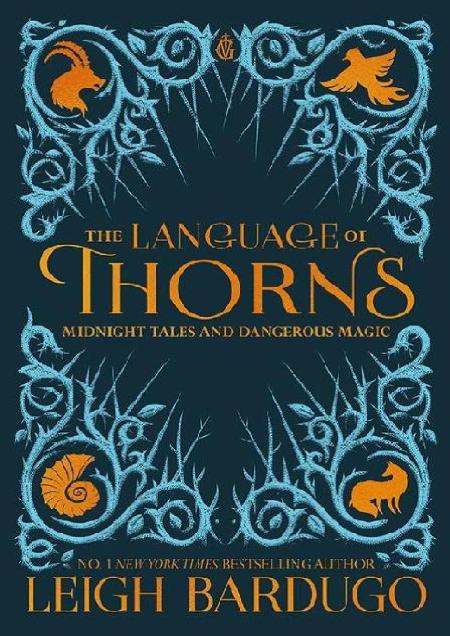 The Grishaverse will be coming to Netflix soon with Shadow and Bone, an original series! Inspired by myth, fairy tale, and folklore, #1 New York Times-bestselling author Leigh Bardugo has crafted a deliciously atmospheric collection of short stories filled with betrayals, revenge, sacrifice, and love. Enter the Grishaverse… Love speaks in flowers. Truth requires thorns. Travel to a world of dark bargains struck by moonlight, of haunted towns and hungry woods, of talking beasts and gingerbread golems, where a young mermaid’s voice can summon deadly storms and where a river might do a lovestruck boy’s bidding but only for a terrible price. Perfect for new readers and dedicated fans, the tales in The Language of Thorns will transport you to lands both familiar and strange-to a fully realized world of dangerous magic that millions have visited through the novels of the Grishaverse. This collection of six stories includes three brand-new tales, each of them lavishly illustrated and culminating in stunning full-spread illustrations as rich in detail as the stories themselves. An Imprint Book This title has Common Core connections. A New York Times Bestseller "Lushly designed and wonderfully rendered … Bardugo doesn’t twist familiar tales so much as rip them open." -Booklist, starred review "Strong writing, compelling stories, and gorgeous illustrations make this collection a must-have." -School Library Journal, starred review "Beautiful imagery conceived from precise, beautiful prose; beautiful cover image and interior illustrations that creep across each page toward a beautiful consummation; beautiful lands inhabited by beautiful hearts." -VOYA, starred review "Elegantly crafted…stylishly intricate illustrations…all fans of the darker side of folktales and folktale-like stories will find the stories satisfyingly full of pain, danger, and vengeance." -The Bulletin of the Center for Children’s Books, starred review "Gorgeously otherworldly…Any lover of retellings or original fairy tales will enjoy." -Kirkus Reviews “Gorgeous, cruel and almost wistful windows onto the dreamscapes and hard lessons of [Bardugo’s] alternate universe . fairy tales with all the darkness intact.” -NPR Book Review "Those who seem innocent are shown to be guilty, one-dimensional characters become more complicated, and mothers who once were absent are given presence and power.” -Mashable "This new collection will intrigue, awe, frighten, and inspire both stalwart fans and new readers looking for a heady spoonful of fantasy.” -Hypable "This nightmare-inducing collection is short but powerful, each tale as brilliant and absorbing as the one before… brilliant storytelling” -Romantic Times "Marvelous tales, as full of twists and delights and strangeness as anything found in the Grimm Brothers. Leigh Bardugo is a master." -Kelly Link, author of Get in Trouble Read all the books in the Grishaverse! The Shadow and Bone Trilogy (previously published as The Grisha Trilogy) Shadow and Bone Siege and Storm Ruin and Rising The Six of Crows Duology Six of Crows Crooked Kingdom The King of Scars Duology King of Scars The Language of Thorns: Midnight Tales and Dangerous Magic The Severed Moon: A Year-Long Journal of Magic Praise for the Grishaverse “A master of fantasy.” -The Huffington Post “Utterly, extremely bewitching.” -The Guardian “The best magic universe since Harry Potter.” -Bustle “This is what fantasy is for.” -The New York Times Book Review “[A] world that feels real enough to have its own passport stamp.” -NPR “The darker it gets for the good guys, the better.” -Entertainment Weekly “Sultry, sweeping and picturesque. . . . Impossible to put down.” -USA Today “There’s a level of emotional and historical sophistication within Bardugo’s original epic fantasy that sets it apart.” -Vanity Fair “Unlike anything I’ve ever read.” -Veronica Roth, bestselling author of Divergent “Bardugo crafts a first-rate adventure, a poignant romance, and an intriguing…