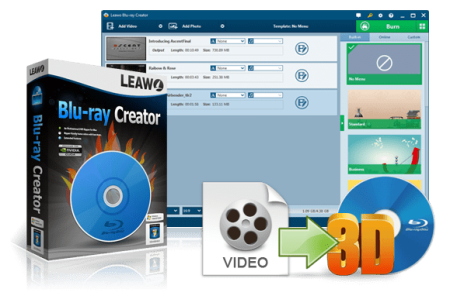 The most comprehensive but easiest to use Blu-ray burner that could convert and burn video to Blu-ray, DVD or ISO Image File, along with practical mini video editor, 3D Blu-ray maker and various other functions.

– Burn Blu-ray, DVD or ISO Image Files out of videos files in 180+ formats;

Whatever’s on your computer, with Leawo Blu-ray Creator, you can fully enjoy it on Blu-ray players. Leawo Blu-ray Creator is the most practical Blu-ray burning software that could help you easily convert video to Blu-ray and burn Blu-ray/DVD discs, folders or ISO Image Files on your computer. It could burn Blu-ray out of video in any format like AVI, MKV, MP4, MOV, WMV, etc. 40+ preset free disc menu and template models are available for choice.

If you like, you could even DIY disc menu and template with the internal menu and template designer. Not only a Blu-ray burner, Leawo Blu-ray Creator also allows you to make use of built-in video editor to get customized Blu-ray/DVD movies. Built in with 3D Blu-ray burner, you can convert 2D video to 3D Blu-ray/DVD in 6 different 3D movie effects. To perfect 3D Blu-ray movie making, it even allows you to adjust 3D depth. In short, with the help of this user-friendly Blu-ray Creator, you can far more than simple video to Blu-ray/DVD converting.

For stereo video enjoyment, this smart BD Creator also supports to burn video to 3D DVDs and Blu-ray discs. It is internally built with versatile 3D setting modes which contain Red/Cyan, Red/Green, Red/Blue, Blue/Yellow, Interleaved and Side by Side. Any of the preset modes is adjustable and the 3D Depth from -50 to +50 will make your 3D effect more vivid.

To modify the output video to a more personalized style, this smart Blu-ray burner program provides a series of editing features like trim, crop, effect and watermark to aid you to convert video to Blu-ray and DVD with customized traits. Video length and size can be cut, brightness, contrast, saturation, and volume zoom can be adjusted, image or text watermark can be added.

The 40+ menu templates are embedded, specified in Standard, Business, Education, Holiday, Nature, Others and more. You can select any one of them as your output DVD or Blu-ray disc menu and template. What’s more, the built-in disc menu and template designer allows you to customize menu and template by employing self-defined Themes, Background, Button, Caption and Advanced options in a super easy way.