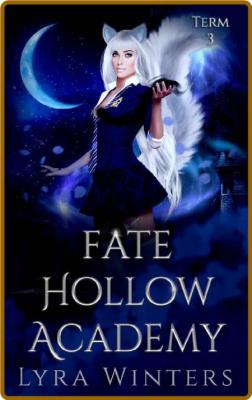 Prepare for Term 3 of Fate Hollow Academy, where the first battle of the war between supernaturals and humans was fought.

Tensions and unrest rose in Kalista like never before. The supernaturals and the Supernatural Council must band together to fight both the humans and the dragons. Our long-term goal is simple: peace between the supernaturals, though we wouldn’t mind the humans being completely wiped out in the process.
The humans were quiet after the battle on the campus, but the dragons have started to show their true colors. They planned to kill those who didn’t stand with them and support a dragon-only utopia in Kalista.
We must face all of our enemies head on to tip the balance of this war in our favor. To fight alongside my mates and the other supernaturals, I needed to pull on the strength my mates were determined I possessed before it was too late.

Fate Hollow Academy Term 3 is book three of four in the Fate Hollow Academy Series. It is a paranormal why-choose romance with all characters over the age of twenty-one. It contains mature subject matter that may not be suitable for all readers.