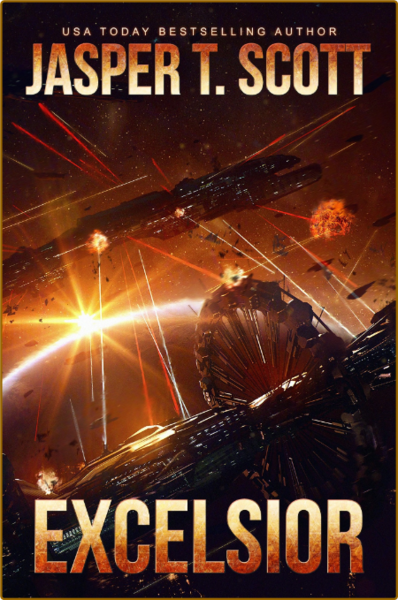 The year is 2790 AD, and this is the Second Cold War. With space elevators and giant orbital fleets hovering over Earth, open war looks inevitable, and people are anxious to get away.**
The lines are drawn, with the communist Confederacy in the East, and the free citizens of the First World Alliance in the West. In hopes of finding a refuge from the looming war, the Alliance is sending Captain Alexander de Leon to explore an Earth-type planet, code-named Wonderland, but at the last minute before launch, a Confederate fleet leaves orbit on a trajectory that threatens both the mission and Alliance sovereignty. The resulting power struggle will determine not only the fate of Alexander’s mission, but the fate of the entire human race.
**

From the Author
Excelsior is a hard science fiction mystery–that means it uses realistic science and physics. The book is the beginning of a new series, but it is completely standalone, so no need to read the sequel if you don’t want to.
What else can I tell you? I’m very proud of this novel. It’s fast-paced, suspenseful, full of strong, relatable characters, and it contains some very interesting ideas for a future of Earth. Besides all that, there’s the usual human-interest sub-plot. Anyone who read Dark Space will like it, but this book will hit a much broader audience than those 250,000 people. This is the kind of book that anyone will love–sci-fi fan or not–so read on and enjoy!

About the Author
Jasper Scott is the USA Today best-selling author of more than 13 novels written across various genres. He was born and raised in Canada by South African parents, with a British cultural heritage on his mother’s side and German on his father’s, to which he has now added Latin culture with his wonderful wife.
Jasper spent years living as a starving artist before finally quitting his various jobs to become a full-time writer. In his spare time he enjoys reading, traveling, going to the gym, and spending time with his family.