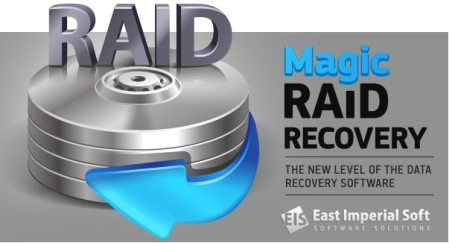 Repair corrupted RAID 0, RAID 1, RAID 4, RAID 5, RAID 6 and many other types of arrays by connecting the disks to your computer.

Magic RAID Recovery by East Imperial Soft is designed to help users repair many types of corrupted RAID arrays and recover information from single-disk and multiple-disk volumes created in popular DAS and NAS devices as well as a wide range of RAID controllers manufactured by HP, Dell, Adaptec, IBM, Intel, Fujitsu, Silicon Image, LSI, ASMedia, Broadcom, and many others.

Mount multiple-disk volumes if the original storage device or RAID controller is broken or unavailable;

Mount multi-disk volumes and RAID arrays regardless of the type of RAID controller;

Extract files and folders from degraded and corrupted arrays without a lengthy rebuild/resilvering (for mirrored or checksum-based arrays).

Synology, QNAP, ASUSTOR, Western Digital, Thecus, TerraMaster, Buffalo and many other Network Attached Storage (NAS) devices are readily available. However, the limited system resources and restrictive user interfaces of many pre-build NAS solutions may render the data inaccessible should one of the hard drives in multiple-disk volumes fail even for redundant arrays. Magic RAID Recovery makes it possible to save your files and folders by connecting the remaining disks directly to your computer and extracting the data without the lengthy and unreliable rebuildiesilvering.

A NAS device is not always about RAID or disk volumes spanned across multiple hard drives. Somes it’s just a single disk or a JBOD array formatted in a file system not recognized by your computer. Magic RAID Recovery can help you extract your files and folders by automatically detecting the type of the file system and making the data accessible on your Windows PC. All major file systems used in Windows (NTFS, ReFS, FAT, exFAT), macOS (APFS, HFS+), Linux (Ext2/3/4, XFS, ReiserFS), and Unix (UFS 1/2) are supported.

All Types of Single-Disk and Multi-Disk Volumes

Updates: official site does not provide any info about changes in this version.