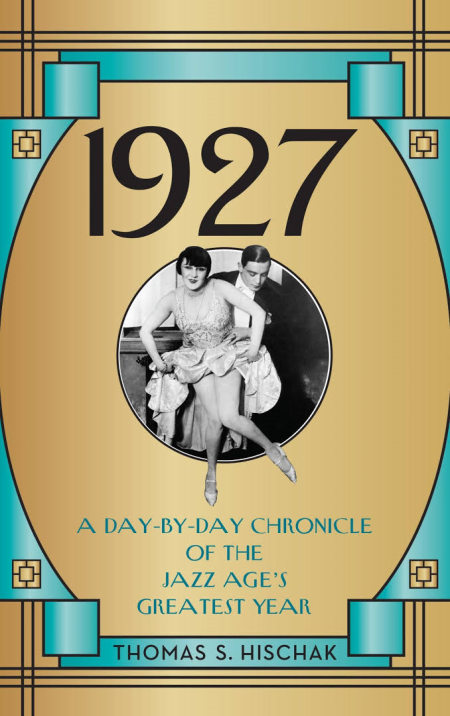 The release of the first talking picture. The invention of the jukebox. These are just a handful of milestones that occurred in one momentous year. In a decade of historic firsts, 1927 stands out as the peak year of the Roaring Twenties, a span of in which dozens of significant events took place-in America and around the world. The economy was booming, the Jazz Age was in full swing, social mores were looser than ever, and the nation was celebrating new dances, gadgets, and heroes. In sports, records were broken, and several champions in different fields thrilled fans with outstanding feats.

In 1927: A Day-by-Day Chronicle of the Jazz Age’s Greatest Year, Thomas S. Hischak provides a daily account of this pivotal period in history. Every major news story-on the national and international stage-is accounted for, from popular culture phenomena to minor news items that would prove to be more important later. In addition to Charles Lindbergh’s historic flight, the book recounts such events as the discovery of the Peking Man, the execution of Sacco and Vanzetti, the Shanghai Massacre, the Great Mississippi River Flood, and the advent of talking pictures with the arrival of The Jazz Singer.

From the world of entertainment-the debut of the classic musical Show Boat and the formation of the Academy of Motion Picture Arts and Sciences-to headlines that gripped the country, this book focuses on a diverse and complicated year. Scattered throughout the book are interesting statistics and pieces of information regarding life during this era. Highlighting the people, inventions, discoveries, and milestones that made these twelve months so special, 1927 will appeal to armchair historians everywhere.

All You Need to Know About ServiceNow Administration

All You Need to Know About Service Portal in ServiceNow